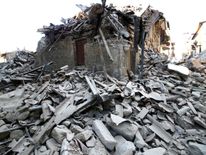 Italy observed a national day of mourning on Saturday with flags across the country at half-staff amid a state funeral for dozens of victims of the earthquake which killed 290 people and injured many more. While most relatives who lost loved ones are still in shock, some are angry that it took rescue crews so long to reach badly-hit villages. Some are also questioning why supposedly quake-proof buildings collapsed. "People now want answers… Why did so many buildings collapse?” AlJazeera reporter Sue Turton said, adding that an investigation has begun.