I've had a couple of experiences lately which left me DUMBfounded: Just yesterday I joked with the voice inside the ordering box at a local Taco Bell saying "I hope you're not really in there", the voice said "No" and I replied, "I'm glad." When I got to the delivery window the woman said, "You may think it's funny, but it's inappropriate to joke with a minor" and refused to take my order...

" When scientists from the Norway's Ragnar Frisch Centre for Economic Research analyzed some 730,000 IQ tests given to Norwegian men before their compulsory military service from 1970 to 2009, they found that average IQ scores were actually sinking. And not just by some miniscule amount. Each generation of Norwegian men appear to be getting around seven IQ points dumber." 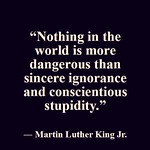 worlds-greatest-danger
(Image by redfoxinict)   Details   DMCA
Read the rest of the story HERE: