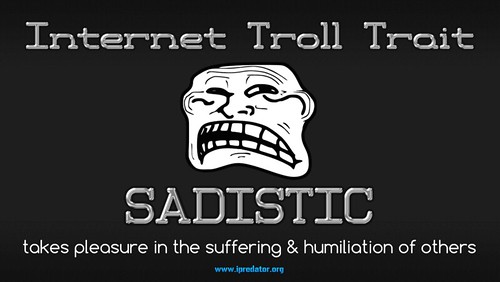 Trolls will lie, exaggerate, and offend to get a response.

a study was published  that confirms what we all suspected: Internet trolls are horrible people.

An Internet troll is someone who comes into a discussion and posts comments designed to upset or disrupt the conversation. with no real purpose behind their comments except to upset everyone else involved. Trolls will lie, exaggerate, and offend to get a response.

Canadian researchers looking for evidence that linked trolling with the "Dark Tetrad" of personality traits: narcissism, Machiavellianism, psychopathy, and sadism conducted two online studies with over 1,200 people, giving personality tests to each subject along with a survey about their Internet commenting behavior.

They found that Dark Tetrad scores were highest among people who said trolling was their favorite Internet activity.