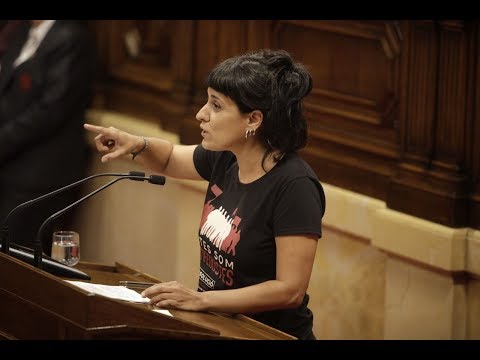 Spearheading this drive for a free and feminist Catalan state is the Candidatura d’Unitat Popular (Popular Unity Candidacy), or CUP — an extreme left, separatist party reviled by Spanish unionists and often viewed wearily by more moderate Catalans. The CUP has seen a meteoric rise to power over the last decade,  securing 10 Catalan Parliament seats in 2015. It vows to build a “socialist, feminist and ecologically sustainable Catalan republic.” The face of the party is firebrand Anna Gabriel, who last year publicly denounced the sexist language often leveled at female CUP politicians in a now-famous video.

“My name is Anna Gabriel and I’m a slut, a traitor; I’m bitter and I need to get laid, because I want a free, socialist and feminist Catalonia,” she can be seen wryly declaring into a microphone.