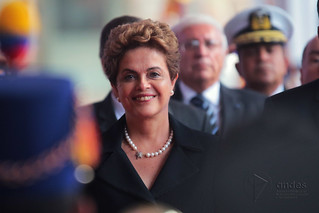 Brazil President Dilma Rousseff
(Image by AgenciaAndes)   Details   DMCA
The acting speaker of Brazil's lower house of Congress annulled the impeachment process against President Dilma Rousseff in a stunning decision on Monday, calling for a new vote on the matter in the chamber. In a move just days before the Senate was expected to vote to put Rousseff on trial, Waldir Maranhao said there were procedural flaws in a lower chamber vote on April 17 that approved the impeachment charges against the leftist president. His decision, seen by markets as decreasing the chances of a more business-friendly government taking power, sent Brazilian financial markets reeling.
Read the rest of the story HERE: