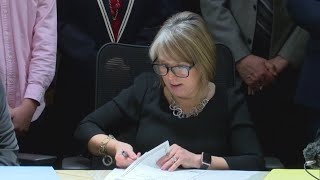 Gov. Michelle Lujan Grisham announced that she withdrew most of NM’s troops from the border. “I reject the federal contention that there is an overwhelming crisis at the border, along which are some of the safest communities in the country. However, I recognize the legitimate concerns of residents in southwestern NM, particularly Hidalgo County, who have asked for our assistance, as migrants and asylum-seekers appear at their doorstep.”

Lujan Grisham said that between 11 and 15 National Guard troops will remain deployed, out of 118 before her order. Then-Gov. Martinez sent 200 troops to the border last April.

The New York Times reported an increased number of crossings at the Antelope Wells Port of Entry is due to new limits on asylum seekers at busier ports of entry in more-populated areas.The influx of those crossing the border is straining medical resources in the area.