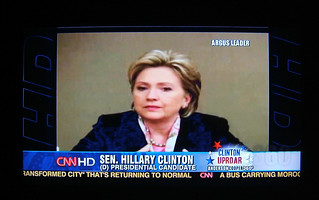 Clinton's reference to the RFK Assassination to Defend Long Primary in 2008
(Image by Tony Fischer Photography)   Details   DMCA
For all those demanding that it is time for Bernie Sanders to drop out of the presidential race, I'd like to call your attention to the infamous 'non-concession speech' Hillary Clinton gave when it became clear that Barack Obama had won the Democratic nomination in 2008. Please pay close attention to her campaign's assessment that it would be up to Obama to win over her supporters (a sentiment that Bernie Sanders is being heavily criticized for now). Note also her pledge not to make any decisions that night. Sanders may have a tough road ahead (especially if provisional ballots are never counted), but it is not an impossible road. Let's wait until all voices are heard. And, as Clinton herself said earlier in that campaign (awkwardly using the example of the RFK assassination) anything can happen.
Read the rest of the story HERE: