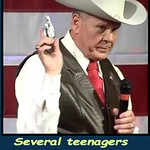 RMooreRape7
(Image by FolsomNatural)   Details   DMCA
For many white evangelical Christians, a dominant political force in Alabama, Moore is the hero in the latest high-stakes chapter of a centuries-long American morality play, a "godly" man beset by evil persecutors from outside the faith, outside the state and outside a value system in which Christianity, patriotism and the Republican Party are inextricably tied. Their views are so vital to Moore's chances because they account for 49 percent of adult Alabamians. The common response among voters has been that it's not up to them to judge Moore, only God can do that, and that they know him as a man of integrity.
Read the rest of the story HERE: