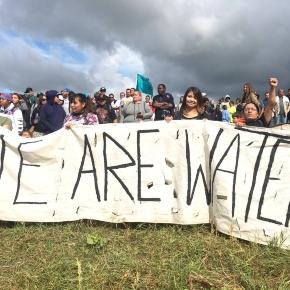 Native American water protectors have been involved with peaceful protests of DAPL for months now, with no end in sight. They have been hit with rubber bullets, have been attacked by police dogs, and have been sprayed with water cannons.
(Image by us.blastingnews.com)   Details   DMCA

What would happen if President Donald Trump made a surprise visit to the Sacred Stones Encampment, where all Native American tribes have been fighting the construction of the Dakota Access Pipeline? Well, considering Trump's erratic and unpredictable ways, he could do or say almost anything. In a series of hypotheticals, a writer who is an enrolled member of the Oglala Lakota Sioux Tribe, a journalist who was just awarded the best columnist award from the Native American Journalists Association, pens a compelling piece that has a poignant side, a tragic side, a hopeful side, and even a hilarious side. And the zinger at the end of this little ditty might just knock you out of your seat!