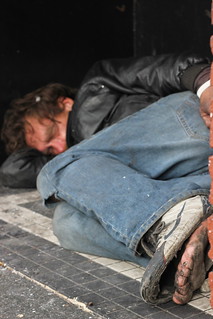 Homeless
(Image by EsotericSapience)   Details   DMCA
Many of America’s largest cities continue to grapple with rising food insecurity and homelessness, according to a report released by the U.S. Conference of Mayors on Tuesday. The latest iteration of the non-partisan group’s annual Hunger and Homelessness Survey found that homeless shelters and food pantries across 22 U.S. cities are struggling to keep up with rising demand for their services. It is in Washington, D.C., Seattle, and Los Angeles where homelessness was found to have increased the most sharply over the past year. The largest increase came in Washington, D.C., where the number of people experiencing homelessness rose by 28 percent and the number of homeless families went up by 60 percent. Meanwhile, requests for emergency food assistance in the city rose by 27 percent during the same period.
Read the rest of the story HERE: