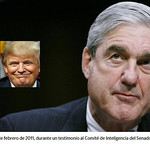 Robert Mueller
(Image by rupertomiller@hotmail. 6672 6121 hijo 66852945)   Details   DMCA
Special counsel Robert Mueller is reportedly more interested in the activities of Donald Trump during his time as president than during his campaign activities. It suggests he's building a case that Trump obstructed justice by firing FBI Director James Comey. Trump went on a Twitter tirade against the FBI over the weekend after reports that Mueller had subpoenaed the Trump Organization for documents related to its efforts to build a Trump Tower in Moscow. Comey and Andrew McCabe, another recently fired top FBI official, kept detailed memos about their conversations with Trump and will most likely be critical witnesses in the obstruction investigation.
Read the rest of the story HERE: