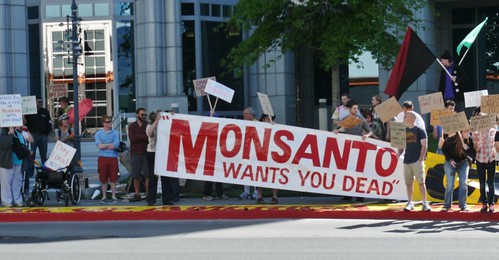 Monsanto
(Image by occupyreno_media)   Details   DMCA
Monsanto Co. started an agricultural revolution with its “Roundup Ready” seeds, genetically modified to resist the effects of its blockbuster herbicide called Roundup. That ability to kill weeds while leaving desirable crops intact helped the company turn Roundup’s active ingredient, the chemical glyphosate, into one of the world’s most-used crop chemicals. When that heavy use raised health concerns, Monsanto noted that the herbicide’s safety had repeatedly been vetted by outsiders. But now there’s new evidence that Monsanto’s claims of rigorous scientific review are suspect. Dozens of internal Monsanto emails, released on Aug. 1 by plaintiffs’ lawyers who are suing the company, reveal how Monsanto worked with an outside consulting firm to  publish a purported “independent” review of Roundup’s health effects that appears to be anything but.
Read the rest of the story HERE:

STAY IN THE KNOW
If you've enjoyed this, sign up for our daily or weekly newsletter to get lots of great progressive content.
Series: "Earth Day/Environment"