The 1971 Powell Memo, by a conservative democrat, was the catalysis for a conservative counter-revolution knee-capping both progressivism and democracy in America. 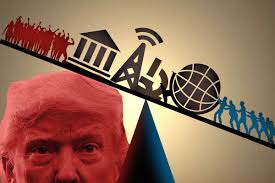 Virtually all, republicans brag of a more conservative track-record than their democratic opponent. However, the linked article makes the case that Joe Biden’s approach to politics is based on “appeasing the right” and “taking the platform of his Republican opponent and trying to make it his own,” which will be problematic to Down-ballot Democrats in 2020, especially those at-odds with Biden’s track-record.

Sanders can demonize conservatism for most Robert’s Five 5-4 rulings, non-adoption of any constitutional amendment in almost 50 years, our permanent war military budget, climate denial, lack of universal health care, theft of a SCOTUS seat, voter and minimum wage suppression; all dividing Americans.
Read the rest of the story HERE: