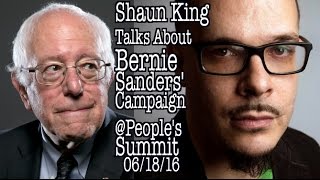 Shaun King: I think Sanders feels obligated to carry Erica Garner’s baton on criminal justice reform. She gave so much of her energy campaigning for Sanders that he seems to see his fight for justice as a real way of paying her back.

He’s made a good start.

So I violated my basic rule of not engaging politicians face-to-face, but in this case, I’m glad I did. I saw the sincerity and growth in a man that I’ve heard others say was too stubborn to change. With those sorts of changes, with people like Sanders taking up the mantle of criminal justice reform, hopefully our struggle can grow so that this country can change, too.