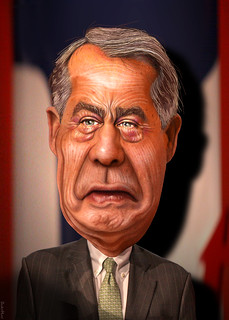 John Boehner - Caricature
(Image by DonkeyHotey)   Details   DMCA
North Carolina Rep. Mark Meadows had heard from leading conservatives that trying to oust Speaker John Boehner right now was a bad idea. Reps. Mick Mulvaney (R-S.C.) and Jim Jordan (R-Ohio), fierce and frequent critics of leadership, thought the move was ill-advised. Some of Meadows’ friends didn’t even see it coming. But just before 6 p.m. Tuesday — a day before the House was set to leave town for its five-week summer recess — Meadows offered a motion to vacate the chair, an extraordinarily rare procedural move that represents the most serious expression of opposition to Boehner’s speakership. If the motion were to pass — most Republicans say it will be hard to cobble together the votes — Boehner would be stripped of the speaker’s gavel, potentially plunging the House of Representatives into chaos.
Read the rest of the story HERE: