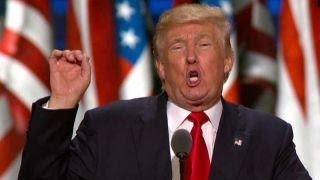 Donald Trump: I'm with you, I am your voice
(Image by YouTube, Channel: Fox News)   Details   DMCA

Donald Trump accepted the Republican presidential nomination on Thursday night with an unusually vehement appeal to Americans who feel that their country is spiraling out of control and yearn for a leader who will take aggressive, even extreme, actions to protect them. With dark imagery and an almost angry tone, Mr. Trump portrayed the United States as a diminished and even humiliated nation, and offered himself as an all-powerful savior who could resurrect the country’s standing in the eyes of both enemies and law-abiding Americans. He was blistering about Hillary Clinton, his Democratic opponent, and her tenure as secretary of state, arguing that her diplomatic strategy in Syria, Iraq, Egypt, Libya and other countries had led to civil unrest and political chaos and rendered her unfit to be president.