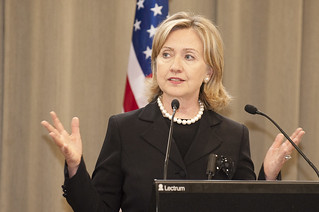 Hillary Clinton
(Image by US Embassy New Zealand)   Details   DMCA
The New York Times formally endorsed Hillary Clinton for the Democratic Party’s nomination, but that stance might seem surprising after a close read of the paper’s in-depth fresh investigation of then-Secretary of State Clinton’s assured, yet ultimately failed, strategy for compulsory regime change in Libya five years ago. Jo Becker and Scott Shane set the tone for their first piece, published in Sunday’s edition, in the Times’ three-part series about Libya’s evolution by noting how that situation didn’t represent the first time Clinton had pushed for the U.S. to become involved in an overseas offensive in a Muslim country at an immeasurable cost.
Read the rest of the story HERE: