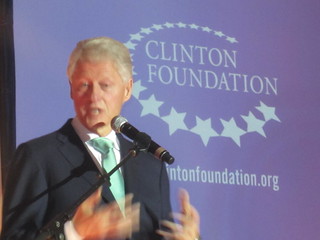 Raking in the Moolah
(Image by Hail Merry Foods)   Details   DMCA
from Investors' Business Daily
The investigation by the Daily Caller News Foundation has uncovered a disturbing pattern of the Clintons’ raising money for the Clinton Foundation from regimes that have checkered records on human rights and that aren’t always operating in the best interests of the U.S. By the way, the $100 million we mentioned above doesn’t appear to include another $30 million given to the Clintons by two Mideast-based foundations and four billionaire Saudis.

“These regimes are buying access,” Patrick Poole, a national security analyst who regularly writes for PJ Media, told the DCNF. “You’ve got the Saudis. You’ve got the Kuwaitis, Oman, Qatar and the UAE (United Arab Emirates). There are massive conflicts of interest. It’s beyond comprehension.”