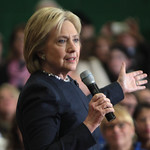 Hillary Clinton
(Image by Gage Skidmore)   Details   DMCA
As Bernie Sanders has continued to win primaries and caucuses, many hard-core Hillary Clinton supporters have called on him to quit the race, arguing that his campaigning, featuring huge rallies of enthusiastic supporters, is somehow hurting Democrats’ chances of defeating Donald Trump. Hard core Sanders activists don’t care. They think he can still win — and they think he has a better chance of beating Trump. And they resent what they hear as hectoring from Hillary supporters denigrating the amazing movement the Sanders campaign has inspired. Secretary Clinton asserts she has already won. But even if she is correct, a big vote for Bernie in the upcoming final primaries could help her and Democrats win the general election against Trump.
Read the rest of the story HERE: