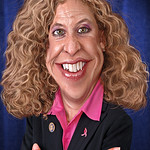 Debbie Wasserman Schultz
(Image by DonkeyHotey)   Details   DMCA
To give you a sense of how much the Democratic Party establishment is on Hillary Clinton’s side, we have an amazing story from Counterpunch about how they funneled millions into her campaign. It all started in 2015 before the primary candidates were known.
Check it out.
Read the rest of the story HERE: