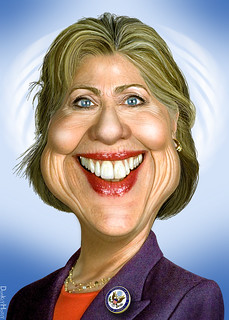 Hillary Clinton --Why is this woman smiling?
(Image by DonkeyHotey)   Details   DMCA

Distrusted by most Americans and generating little enthusiasm even among supporters, Hillary Clinton has wrapped up the Democratic presidential nomination but fallen behind Donald Trump in some polls. Her antidote? A brutal attack on Trump for what she termed his rants, feuds, and lies.

It was an ironic tactic for someone whose dubious behavior stretches back decades to personal enrichment via cattle trades and obstruction of justice with subpoenaed evidence staging a mysterious disappearance. She’s no softie in the political wars, once attacking her opponents for imagined conspiracies. And she has offered her own tall tales, such as landing under sniper fire in Bosnia.