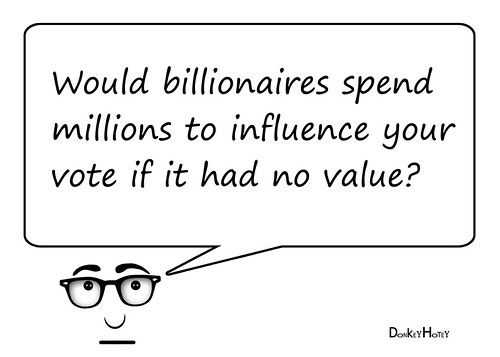 Would billionaires spend millions to influence your vote if it had no value?
(Image by DonkeyHotey)   Details   DMCA

When Donald Trump claimed, "the election's going to be rigged," he wasn't entirely wrong. But the threat was not, as Trump warned, from Americans committing the crime of "voting many, many times." What's far more likely to undermine democracy in November is the culmination of a decade-long Republican effort to disenfranchise voters under the guise of battling voter fraud. The latest tool: Election officials in more than two dozen states have compiled lists of citizens whom they allege could be registered in more than one state – thus potentially able to cast multiple ballots – and eligible to be purged from the voter rolls.