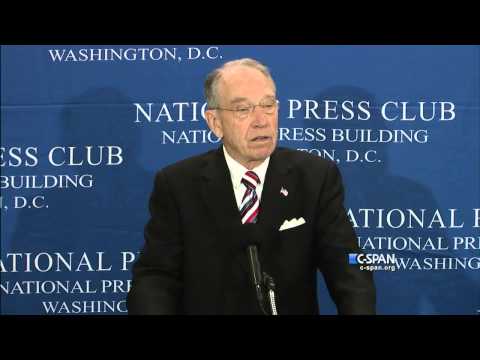 Sen. Chuck Grassley, Chair of the Senate Judiciary Committee
(Image by C-SPAN, Channel: CSPAN)   Details   DMCA
Sen. Chuck Grassley was unequivocal Saturday: The Senate should not consider a nomination from President Barack Obama for the Supreme Court vacancy opened by the death of Justice Antonin Scalia. “It only makes sense that we defer to the American people who will elect a new president to select the next Supreme Court Justice,” Grassley said. But eight years ago, he was equally unequivocal arguing the opposite point of view. He was one of several Republicans at a July 14, 2008, forum who argued against delays in the consideration and confirmation of then-President George W. Bush’s judicial nominees by the Senate’s then-Democratic majority. “The reality is that the Senate has never stopped confirming judicial nominees during the last few months of a president’s term,” Grassley said.
Read the rest of the story HERE: