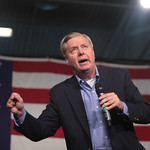 Lindsey Graham
(Image by Gage Skidmore)   Details   DMCA
Sen. Lindsey Graham on Tuesday said that he will introduce legislation to end birthright citizenship after President Trump suggested he wanted to do so through an executive order. "Finally, a president willing to take on this absurd policy of birthright citizenship. I’ve always supported comprehensive immigration reform — and at the same time — the elimination of birthright citizenship," Graham said in a string of tweets. The move would spark an uphill court battle and pave the way for a showdown at the Supreme Court over the 14th Amendment, which states that all persons "born or naturalized in the United States" are "citizens of the United States and of the State wherein they reside."
Read the rest of the story HERE: