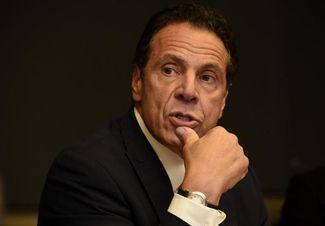 Cuomo on why he skipped the debate, legalizing pot, the future of ...
(Image by syracuse.com)   Details   DMCA

New York Gov. Andrew Cuomo signed legislation on Wednesday that will allow the state to prosecute people who have received a presidential pardon for the same offense, which could potentially affect associates of President Donald Trump. The bill, which was passed by the state legislature in May, closes New York's "double jeopardy" legal loophole that protected individuals who are pardoned by a president for federal crimes from being prosecuted at the state level for the same offense. The change goes into effect immediately and applies to future and past offenses, provided a plea has not been entered and a person has not already been tried. "No one is above the law and New York will not turn a blind eye to criminality, no matter who seeks to protect them," Cuomo, a Democrat, said in a statement.