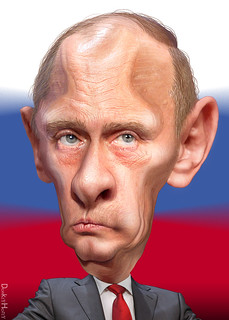 Vladimir Putin - Caricature
(Image by DonkeyHotey)   Details   DMCA
Western observers often use the term 'Putin's Russia' in discussing developments in Russian politics, society, & culture. It has become a meme of sorts in an effort to imply authoritarianism under Vladimir Putin. A key pillar of this meme is that the Kremlin controls all mass media in Russia, thus shaping the minds of Russians to Putin's needs & liking. The regime has far from full control over television in Russia, the Internet remains almost entirely free & there are a plethora of independent radio channels & print media. There is also significant pluralism of views on state-owned media, including television, the main source of news for most Russians. We can bust the misconception communicated by this meme of a mythical totalitarian effect of television & state media in general on public opinion by comparing Russian public opinion with Putin's views on the eve of his rise to power.
Read the rest of the story HERE: