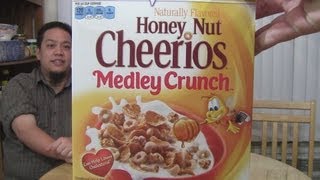 Environmental Working Group released its 3rd round of tests measuring glyphosate, the active ingredient in Monsanto’s Roundup in popular oat-based cereals; the 2 highest levels of glyphosate were found in Honey Nut Cheerios Medley Crunch and Cheerios.

All but four of the products tested contained levels of the chemical above 160 parts per billion (ppb) benchmark set by EWG. EPA calculations suggest that 1- to 2-year-old children likely experience the highest exposure to glyphosate. According to the agency’s risk assessment, the exposure level is 230 times greater than EWG’s health benchmark of 160 ppb.

In the May 2019 batch of testing, EWG commissioned Anresco Laboratories to test a range of oat-based products, including 300 grams each of 21 oat-based cereals, snack bars, granolas and instant oats made by General Mills and Quaker.