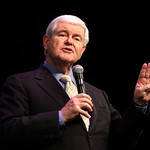 Newt Gingrich
(Image by Gage Skidmore)   Details   DMCA
Former House speaker Newt Gingrich said Thursday he will not serve in President-elect Donald Trump’s Cabinet. “I want to be free to network across the whole system and look at what we have to do to succeed,” Gingrich said when briefly reached by phone. Holding a Cabinet post would have been “not physically doable,” he said. The remarks from the former GOP presidential candidate, 73, came after he told McClatchy he intends to focus on “strategic planning” during the Trump administration rather than run a federal department. The former House speaker said he does not plan to hold any official role under Trump.
Read the rest of the story HERE: