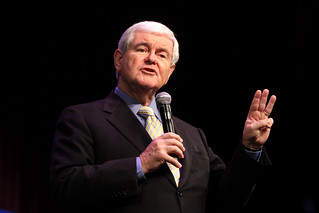 Newt Gingrich
(Image by Gage Skidmore)   Details   DMCA
Republican veteran Newt Gingrich did not rule out on Wednesday the possibility that he could be persuaded to serve as presumptive nominee Donald Trump's vice presidential running mate, but said Trump has plenty of other talent to consider. "I would certainly talk about it," Gingrich told Fox News Channel's Sean Hannity. "I wouldn't turn it down automatically." Gingrich has been a persistent subject of speculation as a possible Trump running mate. He is a former speaker of the House of Representatives and, as such, meets one of Trump's main requirements for the job - that his No. 2 be someone who could help steer legislation through Congress.
Read the rest of the story HERE: