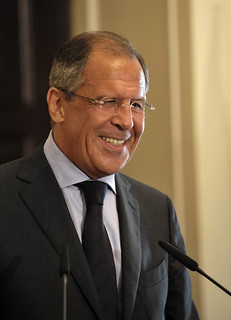 Sergey Lavrov
(Image by PolandMFA)   Details   DMCA
German Minister of Defence Ursula von der Leyen told Der Spiegel that she welcomed president Putin’s intentions of joining the fight against the extremist organization “Islamic State”. It would be a matter of mutual interests, she said. A speaker of the Ministry of Foreign Affairs added, Germany would welcome additional efforts of Russia in the fight against IS. Foreign Minister Frank-Walter Steinmeier even announced the starting of a joint venture between him, Russian foreign minister Lavrov and their French colleague Laurent Fabius with the aim of bringing the Syrian civil war to an end. Lavrov and Fabius are expected to arrive in Berlin this Saturday.
Read the rest of the story HERE: