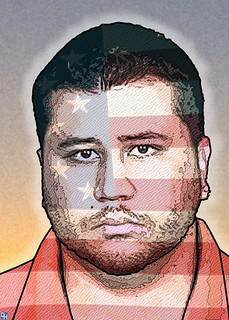 George Zimmerman
(Image by DonkeyHotey)   Details   DMCA
Four years after Zimmerman shot Trayvon Martin, the acquitted killer is trying to turn a profit on the gun he used to do it. “It is what was used to save my life from a near-death brutal attack by Trayvon Martin,” Zimmerman said of the gun. “If it was a stick or mace, it’s the one tool I had that prevented Trayvon from killing me.” Zimmerman claims he initially wanted to keep the gun for his future children and grandchildren but said he came to the decision to sell the gun after praying. “It took me several weeks to think about it,” Zimmerman said. It’s what the forefathers would do, he surmised.
Read the rest of the story HERE: