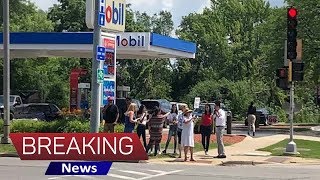 The video, taken by one of the customers: as background for the moments before they started filming, Carolina Buitron, who lives in the area, told NBC Chicago that she and family members (including visitors from Mexico) were speaking to one another in Spanish when the clerk asked them to leave, then called them “illegals.”

"He started asking about my cousins, if they were illegal, family or friends, are they adopted," Buitron alleged to NBC Chicago as context. That’s when she started recording. In a second video, a customer joins in, telling the family they have “no rights.”

Among other gems, the clerk says, “I’m an American” and follows it up with, “Are you a citizen?” Because… Their citizenship is relevant to them buying some snacks? He also told them they were in “the wrong country."