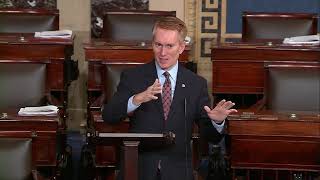 Senator Lankford Speaks on the Passing of former President George HW Bush On Thursday, December 6, 2018, Senator James Lankford (R-OK) delivered a speech on the floor of the US Senate about the life and legacy of former President ...
(Image by YouTube, Channel: SenatorLankford)   Details   DMCA

After Trump’s claims that Mexico will pay for a border wall, Sen. James Lankford (R-OK) says it is “not excessive” for American taxpayers to pay $5 billion for the useless structure. Meanwhile, Republicans have been pushing for cuts to Social Security to make up for tax cuts given to the ultra rich.

Republicans have been pushing for Social Security cuts to replace tax cuts given to the ultra rich. Trump insisted that $5 billion in U.S. taxpayer funds be allocated for the border wall.

Appearing on CNN, Sen. Lankford was asked about Trump’s demands. He replied, “The big drama is about the border wall funding, a 5-billion-dollar amount is not an excessive amount for what can be done reasonably in a year.”