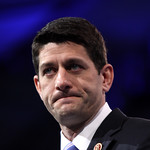 Paul Ryan
(Image by Gage Skidmore)   Details   DMCA
Faced with a conservative revolt and a change of heart from an unpredictable president, House GOP leaders on Thursday altered course and will try to ram through a government spending bill that includes $5.7 billion for the border wall. The new funding package would add two things to the stopgap measure that cleared the Senate by voice vote Wednesday night: $5.7 billion for President Trump’s wall on the Mexican border and $8.7 billion in emergency disaster aid for wildfires, hurricane damage and flooding. With roughly 390 voting members, it will require roughly 195 GOP votes to pass the new funding package.
Read the rest of the story HERE: