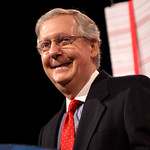 Mitch McConnell
(Image by Gage Skidmore)   Details   DMCA
Senate Majority Leader Mitch McConnell (R-Ky.) said Wednesday he will move a stopgap measure funding the government until early February. The measure if passed by Congress and signed into law by President Trump would prevent a partial shutdown set to begin Saturday, and would fund government departments and agencies through Feb. 8. It will keep funding for border fencing flat, and punt a showdown on that issue until next year — when Trump will have less leverage with Democrats in control of the House. McConnell warned that Trump has no intention of dropping the issue.
Read the rest of the story HERE: