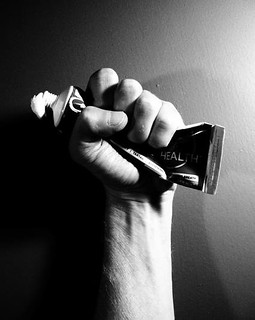 Squeeze the middle
(Image by Patrick Feller)   Details   DMCA
As Diane Ravitch says: What state takeovers of local schools do best is extinguish democracy and give the governor control of a large pot of money and allows the stare gov't to get rid of unions and contracts.  THIS is the common thread behind the GOP's new enthusiasm for state control, as Gov. Kasich took over Youngstown schools in quiet coup.  Georgia Gov. Deal wants to create a takeover district like the (failing)'Achievement School District' in Tenn.  Michigan Gov. Snyder   has taken over several cities and school districts. The GOP in Virginia wants to supersede local control.  Look no farther than ALEC, which has drafted model legislation for state takeovers.  Once the governor takes over, he can give the public schools to charter operators.      Privatize public schools?  A win for everyone but the children, the community, and democracy.
Read the rest of the story HERE:

STAY IN THE KNOW
If you've enjoyed this, sign up for our daily or weekly newsletter to get lots of great progressive content.
Series: "Ending democracy: end the institution of public schools"