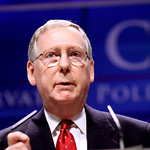 Mitch McConnell
(Image by Gage Skidmore)   Details   DMCA
Senate Majority Leader Mitch McConnell, who prides himself in working with his Republican colleagues and allowing the GOP conference to work its will, finds himself in the middle of an increasingly public and bitter battle over criminal justice reform that pits President Trump, Jared Kushner and the chairman of the Senate Judiciary Committee against a group of conservatives opposed to the bill. He is also at the center of a fight over Saudi Arabia, with some Republicans demanding tough legislation in response to the killing of journalist Jamal Khashoggi at the Saudi Consulate in Istanbul. The criminal justice reform bill is turning into the biggest headache for McConnell.
Read the rest of the story HERE: