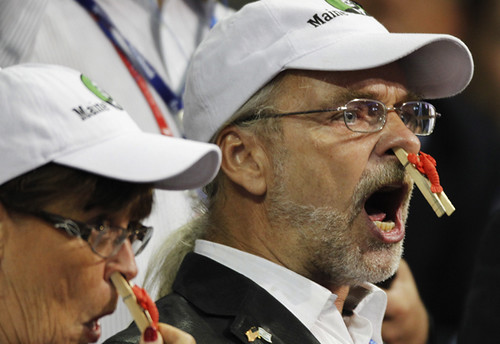 Republican Convention
(Image by Serfs UP ! Roger Sayles)   Details   DMCA
Hewlett-Packard, which donated $1 million in funds and tech equipment to the past two Republican National Conventions, abruptly said it would snub this year's GOP gathering in Cleveland. Apple, which committed computers and iPhones to the last two Republican conventions, also sent its regrets. Motorola, which donated more than $600,000 during the 2012 RNC, took the same path. The series of cancellations caps a remarkable victory for ColorOfChange and Credo Action, online activist groups that are pressuring some of the biggest corporations in the country to withdraw from what's shaping up to be the most contentious political gathering in nearly half a century. They warned companies that Trump's divisive campaign and tactics would tarnish their well-polished brands. Did they want to be associated with a candidate who has repeatedly attacked women, immigrants and minorities?
Read the rest of the story HERE: