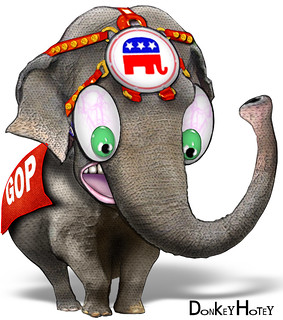 Republican Elephant
(Image by DonkeyHotey)   Details   DMCA
Republicans in Congress are threatening to disrupt a key piece of President Barack Obama's pledge to combat global warming, just days before world leaders begin climate negotiations in Paris. Obama, with teams of advisers and cabinet members, arrives in Paris next week, hoping to wrap up years-long negotiations with nearly 200 countries with a sweeping agreement that sets specific goals to stave off a catastrophic increase in global temperature. But back in Washington, Republicans are working to prevent a deal, warning Obama they will use any tool necessary to block funding he has promised to help poor nations fight climate change.
Read the rest of the story HERE: