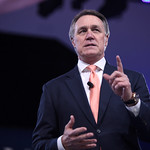 David Perdue
(Image by Gage Skidmore)   Details   DMCA
Sen. David Perdue, a freshman senator from Georgia, opened his remarks at the Faith & Freedom Coalition’s Road to Majority conference by encouraging attendees to pray for President Obama. But, he added in a joking tone, they need to pray for him in a very specific way: “We should pray for him like Psalms 109:8 says: Let his days be few, and let another have his office,” the senator said, smiling wryly. The rest of that passage, which Perdue did not recite, reads, “May his children be fatherless and his wife a widow. May his children be wandering beggars; may they be driven from their ruined homes.” Perdue’s joke drew immediate criticism. Adam Jentleson, a spokesman for Senate Minority Leader Harry Reid, tweeted, “Republican Senator David Perdue is praying for President Obama to die. This is why Trump is the GOP nominee.”
Read the rest of the story HERE: