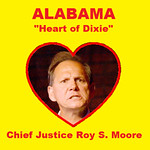 Roy Moore, an evangelical activist and Republican candidate for Senate from Alabama who recently made headlines for lying about receiving a massive salary from his Christian charity, the Foundation for Moral Law, is now involved in a much bigger scandal: he’s been accused of having inappropriate sexual contact with a 14-year-old girl. Moore is someone who suggested America is “evil” because we allow same-sex marriage. He’s the same guy who said it was “against the law” for NFL players to kneel during the National Anthem. (Do you know what else is illegal? Touching underage girls inappropriately.) He’s the man who made a name for himself by trying to install a Ten Commandments monument in the Alabama Supreme Court in the dead of night. I guess there’s no commandment that says “Thou shalt not molest children,” so he didn’t see this as hypocritical.
Read the rest of the story HERE: