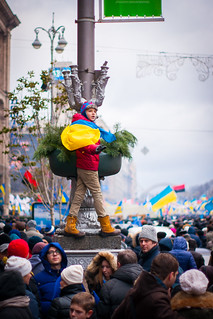 Kyiv, Euro Maidan 2013
(Image by Oleksii Leonov)   Details   DMCA
They were the shock troops of Urkrainian regime change, overthrowing Kiev's corrupt government. They were seen as the heroes of the revolution. They were on the good side. And now they are heavily armed.  Known as the Right Sector, Azov or Svoboda, they were supposed to merge into the regular army. Instead, they created parallel battalions which the government is struggling to control. In Odessa, in May 2014, they slaughtered in full impunity 45 people. An under-reported massacre of pro-Russian supporters. How come we didn't hear any protest or criticism from western democracies? The answer might be that the Ukrainian revolution was strongly backed by US diplomacy. In the new Russia vs. USA cold war, Ukraine is a strategic pawn to contain Putin's ambitions. Acclaimed journalist, Paul Moreira, reveals the politics at play in Masks of Revolution. [with English sub-titles]
Read the rest of the story HERE: