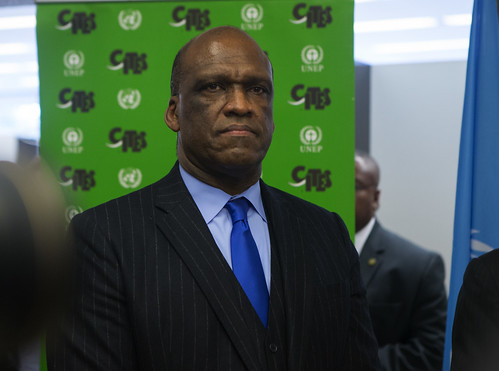 John W. Ashe, President of the U.N. General Assembly, in Geneva on World Wildlife Day
(Image by US Mission Geneva)   Details   DMCA
Back in January, Ng dropped his request for a speedy trial of his own. Ng's name recently cropped up in the Panama papers, and he just happens to have been a large donor to the Clintons in the 90s. He was tied to the so-called Chinagate scandal at the time:

The "Chinagate" fundraising scandal plagued the 1996 Bill Clinton-Al Gore campaign and Hillary was very much involved. Chinagate aka Commercegate is the most serious scandal in U.S. history. It involves the transfer of America's most sensitive technology, including but not limited to nuclear missile and satellite technology, apparently in exchange for millions of dollars in contributions to the 1996 Clinton-Gore re-election effort and the Democratic National Committee.

... The case was so serious and so damaging that the Commerce Department asked for a judgment against itself to avoid any further revelations.