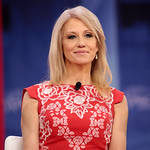 Kellyanne Conway
(Image by Gage Skidmore)   Details   DMCA
A federal agency is recommending that White House adviser Kellyanne Conway be removed from federal service, saying she violated the Hatch Act on numerous occasions. A separate statement from the Office of the Special Counsel, issued alongside the report, said that "given that Ms. Conway is a repeat offender and has shown disregard for the law, (the office) recommends that she be removed from federal service." The recommendation carries no actual power to remove Conway. That decision is up to Trump, who has expressed nothing but support for Conway.
Read the rest of the story HERE: