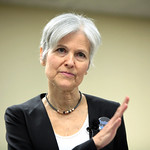 Jill Stein
(Image by Gage Skidmore)   Details   DMCA
After two days of ballot counting, conflicting court decisions and legal wranglings between frustrated lawyers, a federal judge on Wednesday halted the hand recount of 4.8 million ballots cast for president in Michigan, concluding there's no real evidence of foul play and there's no valid reason to continue the recount. U.S. District Judge Mark Goldsmith said 'there is no basis' for him to ignore a state court ruling that said the recount should never had started. In addition to Michigan, Jill Stein is also seeking recounts in Wisconsin and Pennsylvania. If recounts resulted in all three states flipping to Democrat Hillary Clinton from Trump, Clinton would win the presidency. Stein has said she doesn’t expect to change the election outcome, but wants to test the integrity of voting systems.
Read the rest of the story HERE: