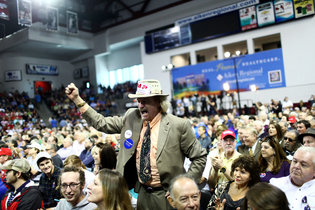 Donald Trump's strongest supporters can be seen as .a certain kind of democrat willing to vote against self-interest so as to deprive others of basic human rights.
(Image by nytimes.com)   Details   DMCA

An older white male who grew up in the projects of the South discusses why he isn't a Trump supporter, even though Trump’s tax plan will save him about $12,000 a year and save his children more than a million dollars in inheritance taxes. In his own words, the Scholars & Rogues writer says: 'I voted against Trump because I have grandchildren and hope to have more, and I believe that he will make their world a worse place...we are driven by the same underlying emotional drive as those dopes who voted for Trump. It’s important enough to us that we’re willing to vote against our own economic self-interests just like they did....Theirs is a nastier and more direct assertion of superiority. It calls for proving their superiority by depriving those they deem inferior of basic rights...'