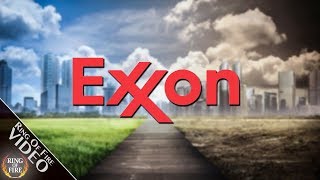 Exxon Again Proves They're The Worst Corporation EVER Learn more about legal cases like this: al.law/ A federal judge has dismissed Exxon's efforts to block a climate change investigation into the company ...
(Image by YouTube, Channel: The Young Turks)   Details   DMCA

Not only did Exxon predict the rise in emissions, it also understood how severe the consequences would be.

According to an internal 1982 document from Exxon Research and Engineering Company — obtained by InsideClimate News as part of its 2015 investigation into what Exxon knew about the impact of fossil fuels on climate change — the company was modeling out the concentration of carbon emissions several years into the future.

Despite this knowledge, the company chose not to change or adapt its business model. Instead, it chose to invest heavily in disinformation campaigns that promoted climate-science denial, failing to disclose its knowledge that the majority of the world’s fossil-fuel reserves must remain untapped in order to avert catastrophic climate change.