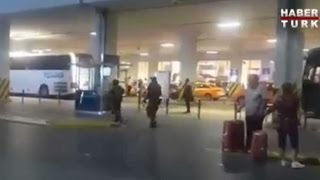 Two explosions rock Istanbul's Ataturk airport
(Image by George Senda, Channel: George Senda)   Details   DMCA
Two explosions hit Istanbul's main international airport on Tuesday, wounding several people, a Turkish official said, in what appeared to be the latest in a string of attacks in Turkey's biggest city this year. The blasts hit Istanbul Ataturk, Turkey's largest airport and a major transport hub for international travelers. Witnesses also reported hearing gunshots. Footage from broadcasters, including CNN Turk, showed ambulances rushing to the scene. One witness told CNN Turk that gunfire was heard from the car park at the airport. Taxis were ferrying wounded people from the airport, the witness said. Turkey has suffered a spate of bombings this year, including two suicide attacks in tourist areas of Istanbul blamed on Islamic State, and two car bombings in the capital, Ankara, which were claimed by a Kurdish militant group.
Read the rest of the story HERE: