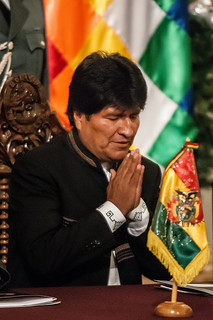 In a riot of colour, noise and statistics, Bolivian president Evo Morales marked 10 years of his “indigenous socialist” rule on Friday, one month before a referendum that could extend his period in office until 2025. Thousands of Ayamara and Quechua people gathered to honor country’s first indigenous leader.  “Peace can only be achieved through social justice,” Morales said before recapping a long list of achievements over the past 10 years, including a fall in inflation from 11.5% to 6.3%, a tripling of per-capita income, and steady falls in poverty and inequality. Prior to the celebration, he paid homage to Pachamama (Mother Earth) at Kalasasaya, a pre-Incan temple at Tiahuanaco where the ancients believed the Door of the Sun could be found.

STAY IN THE KNOW
If you've enjoyed this, sign up for our daily or weekly newsletter to get lots of great progressive content.
Series: "Evo Morales"