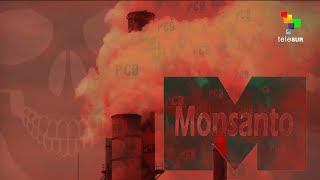 Monsanto, America's Monster
(Image by teleSUR English, Channel: teleSUR English)   Details   DMCA
Monsanto was heavily involved in profiting from war in tandem with the U.S. government, including the atom bomb and agent orange used in the Vietnam war. DDT was a dangerous chemical produced by Monsanto that devastated the environment, and responsible for birth defects and cancer. Monsanto chose to conceal the truth behind their deadly products, through propaganda. The U.S. government was also implicit in hiding the truth behind Monsanto’s harm. Monsanto has consistently used propaganda to assure the public that its products are safe.
Read the rest of the story HERE: